Krushi Bhawan embodies the idea of inclusive architecture – created for the people, built by the people, and expressive of their collective cultural identity. The project has etched an all-pervasive impact on the community of Orissa. A government facility that doubles up a cultural haven, this project celebrates regional craft and community empowerment with free-flowing public amenities. In the following article, Studio Lotus talks about their design pedagogy and the various impulses and inspirations that brought Krushi Bhawan into being.

Krushi Bhawan derives its visual identity from local materials and vernacular narratives, manifesting the idea of decentralized state power. The project had an undoubted mandate to reimagine the government’s relationship with its people. Krushi Bhawan’s built fabric is punctuated with a vibrant narrative of traditional Odia craft envisioned at an unprecedented architectural scale, a product of over 100 highly-skilled artisans coming together. It exemplifies how a government can be the prime facilitator of patronage for regional craft, and the communities and economies it sustains.

The distinctive brick façade is inspired by the Ikat patterns of Odisha handlooms, created using clay in three different colours that represent the geographical diversity of the region. The tribal cast metal craft of dhokra is adapted to make light fixtures that wrap around the ground floor columns, as well as metal screens that line the building corridors. Similarly, agricultural motifs have been displayed across the building through a variety of craft techniques — such as the bas-relief carvings in laterite along the Public Plaza, which depict ripe paddy crops illustrated in the Odia Pattachitra (cloth-based scroll paintings) style. In the Central Court, a Crop Calendar on a stone inlay floor displays the harvesting cycles for the most prevalent crops in the region.

Krushi Bhawan is a government facility that doubles up a cultural haven, this project celebrates regional craft and community empowerment with free-flowing public amenities.

Krushi Bhawan was originally planned as a purely administrative space where the client initially envisaged a typical glass office building. However, Studio Lotus envisioned a well-lit and ventilated building where the city draws a connection to the building’s interiors. While designing government projects, it is daunting to draw stakeholders into adopting such unconventional approaches. Cues were taken from Köenigsberger’s original vision for Bhubaneswar where he saw the Capitol Complex with a host of government offices becoming “a lively point of public life.” Consequently, public functions and community spaces were interspaced in the building which added to the city’s social infrastructure. Such a proposition was willingly embraced by the clients.

“We designed the building to transcend the typical closed office campus morphology by integrating governmental functions with direct community engagement and education. Through a meticulously developed spatial programme, the complex brings the Odia farmers and the citizens of Bhubaneswar into the fold and facilitates their interaction and collaboration.”

public functions and community spaces were interspaced in the building which added to the city’s social infrastructure. Such a proposition was willingly embraced by the clients.

Studio Lotus collaborated with Sibanand Bhol of Collective Craft to bring the folklore narrative to life at Krushi Bhawan. Stone carvers, metal workers, and Pattachitra craftsmen were brought on board to cater towards the realization of this narrative.

Krushi Bhawan is predicated on the principles of Conscious Design—it draws directly from its socio-cultural and environmental context. It seeks to present with its design and building process a model of frugal innovation that celebrates culture, includes the neighbourhood and is highly sustainable. Craft has been integrated with a spatial narrative keeping the expenditure low—demonstrating the feasibility as well as scalability of the approach.

Krushi Bhawan is predicated on the principles of Conscious Design—it draws directly from its socio-cultural and environmental context.

The operational costs of the building were largely reduced by employing various passive design techniques. The courtyard morphology and the inclusion of a stilt level aid optimal air circulation through the building; the staggered building profile along the Central Court enables self-shading. The high thermal mass of the complex has cut down the need for mechanical air-conditioning to only 20% of the built spaces.

The project uses a material palette of locally-sourced materials which significantly reduces the building’s carbon footprint. Other interventions include solar panels on the terrace, on-site rainwater harvesting and wastewater treatment, and an anaerobic bio-digestive solid waste management system that generates compost and fertigation water for the landscape. With its design and building process, Studio Lotus has brought forward a model of prudent configuration in design that celebrates the culture and acts as a catalyst for the genesis and growth of neighbourhoods in India. 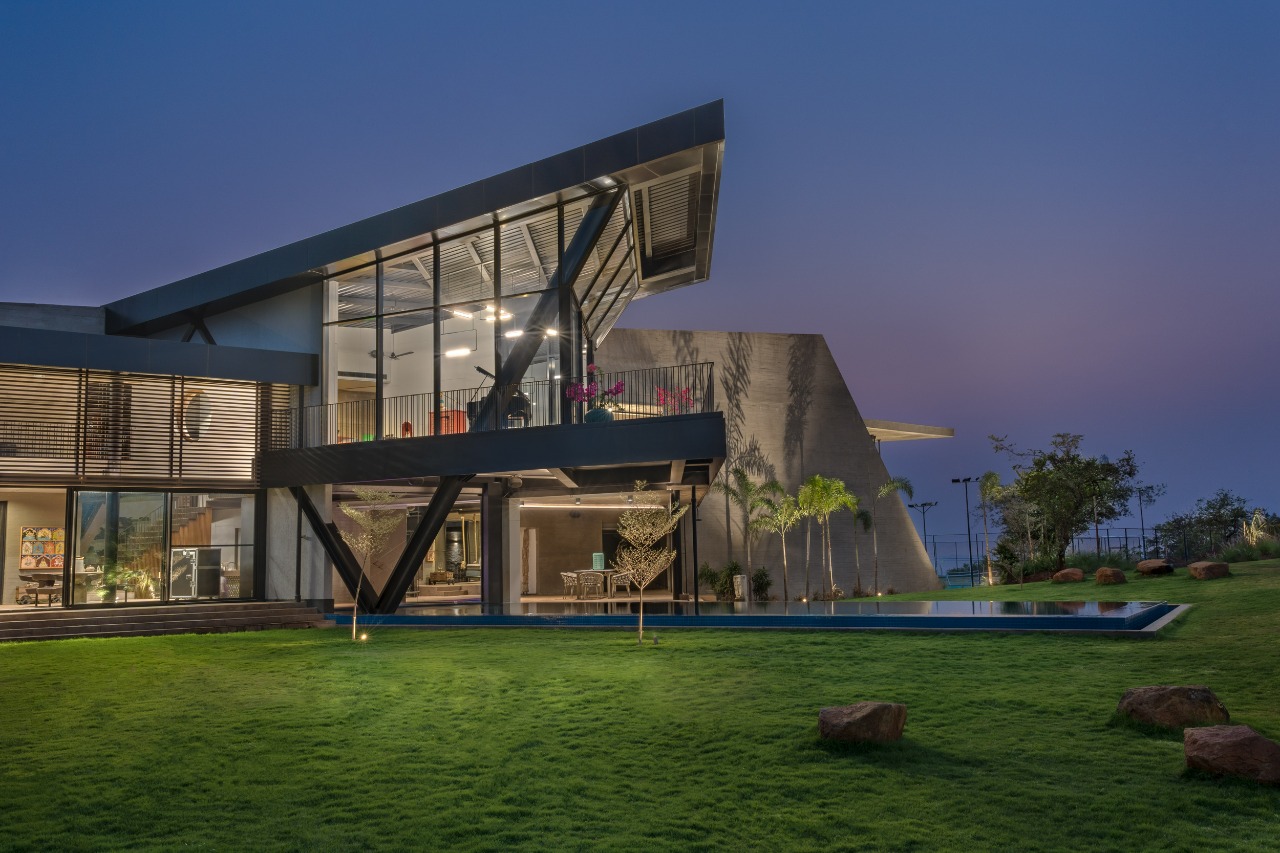 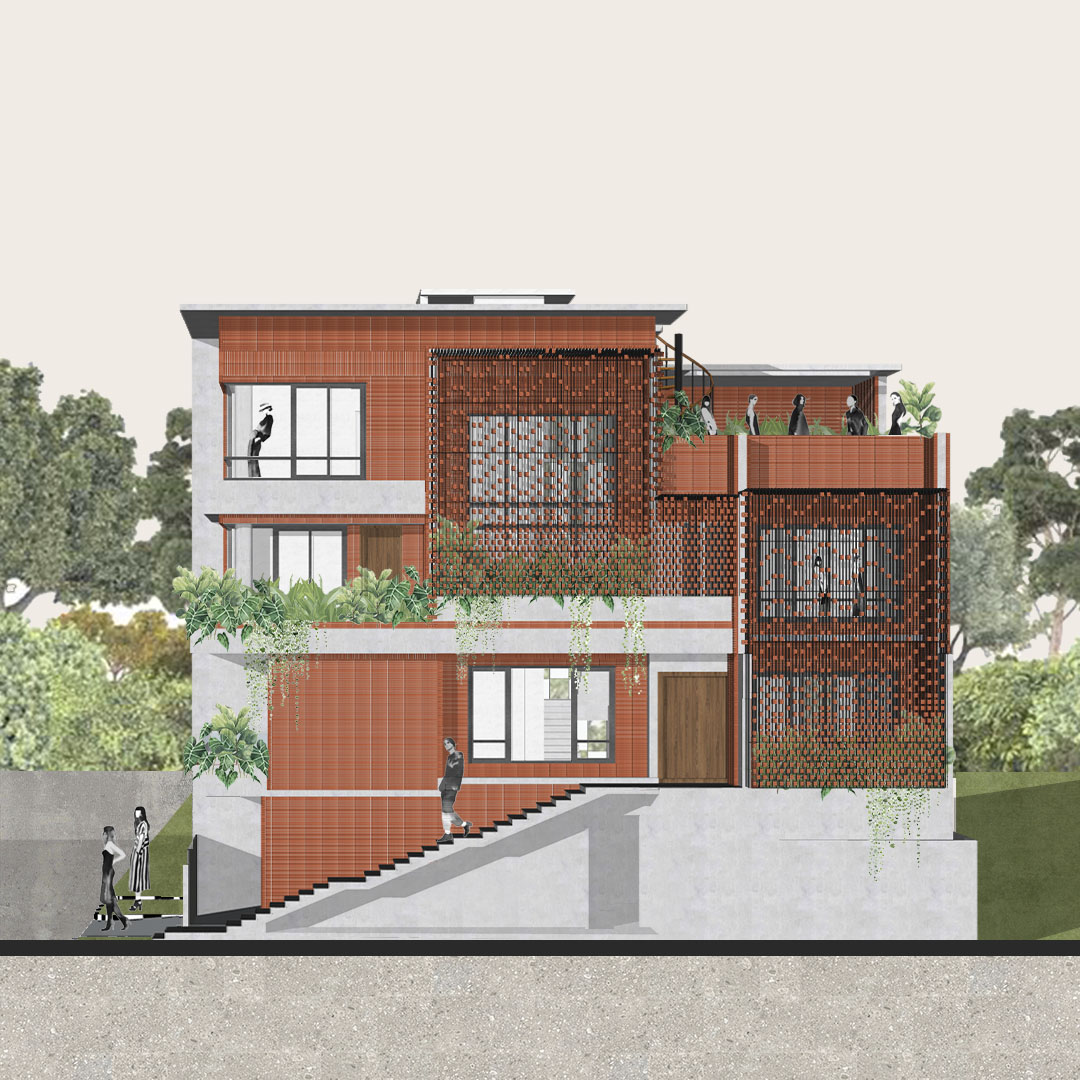 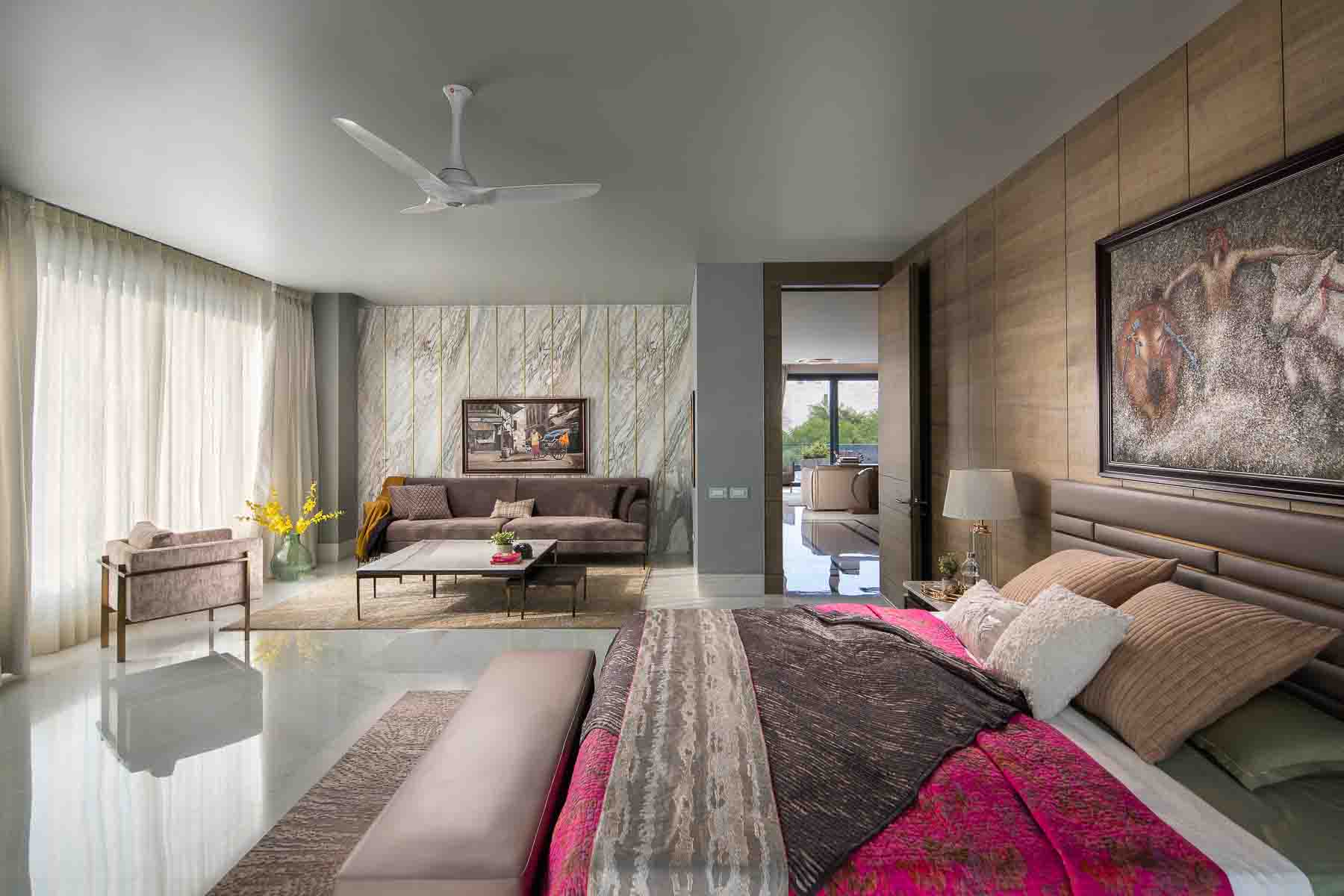 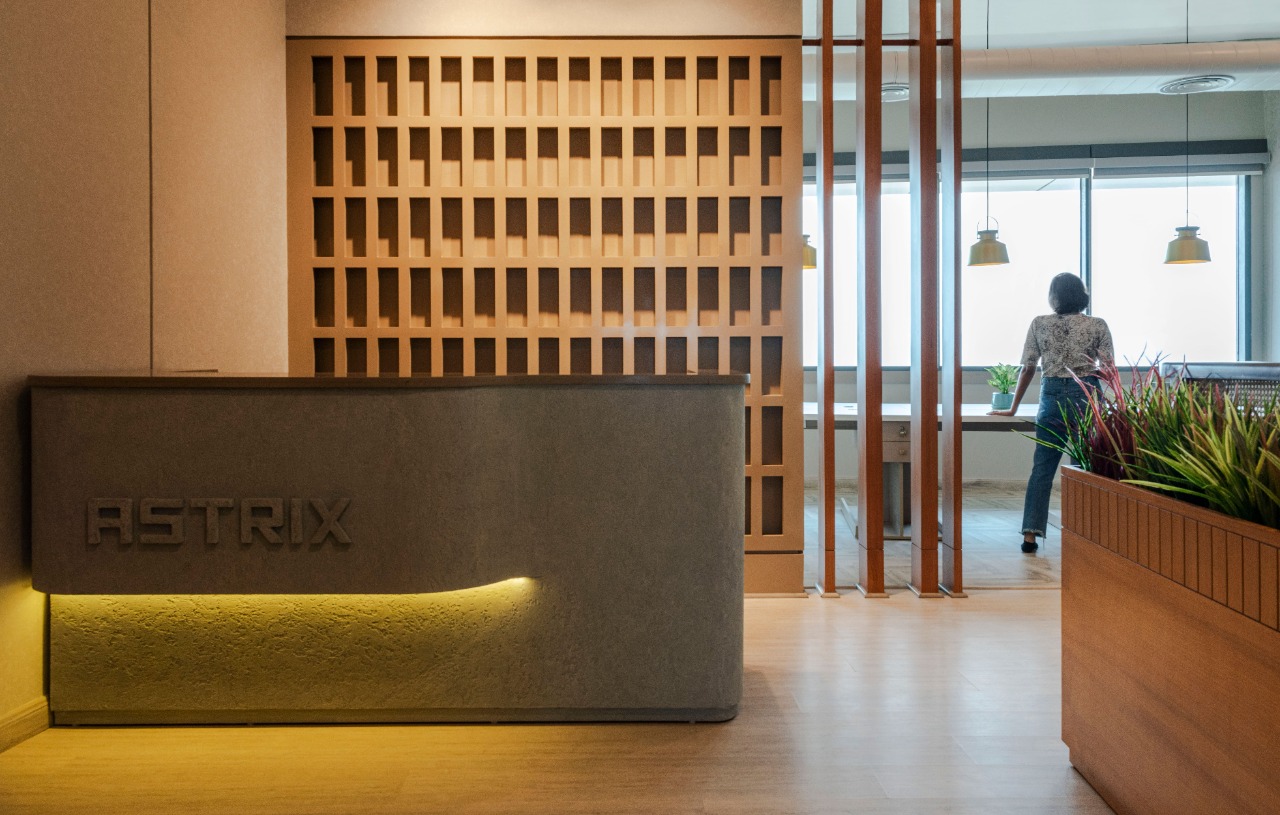 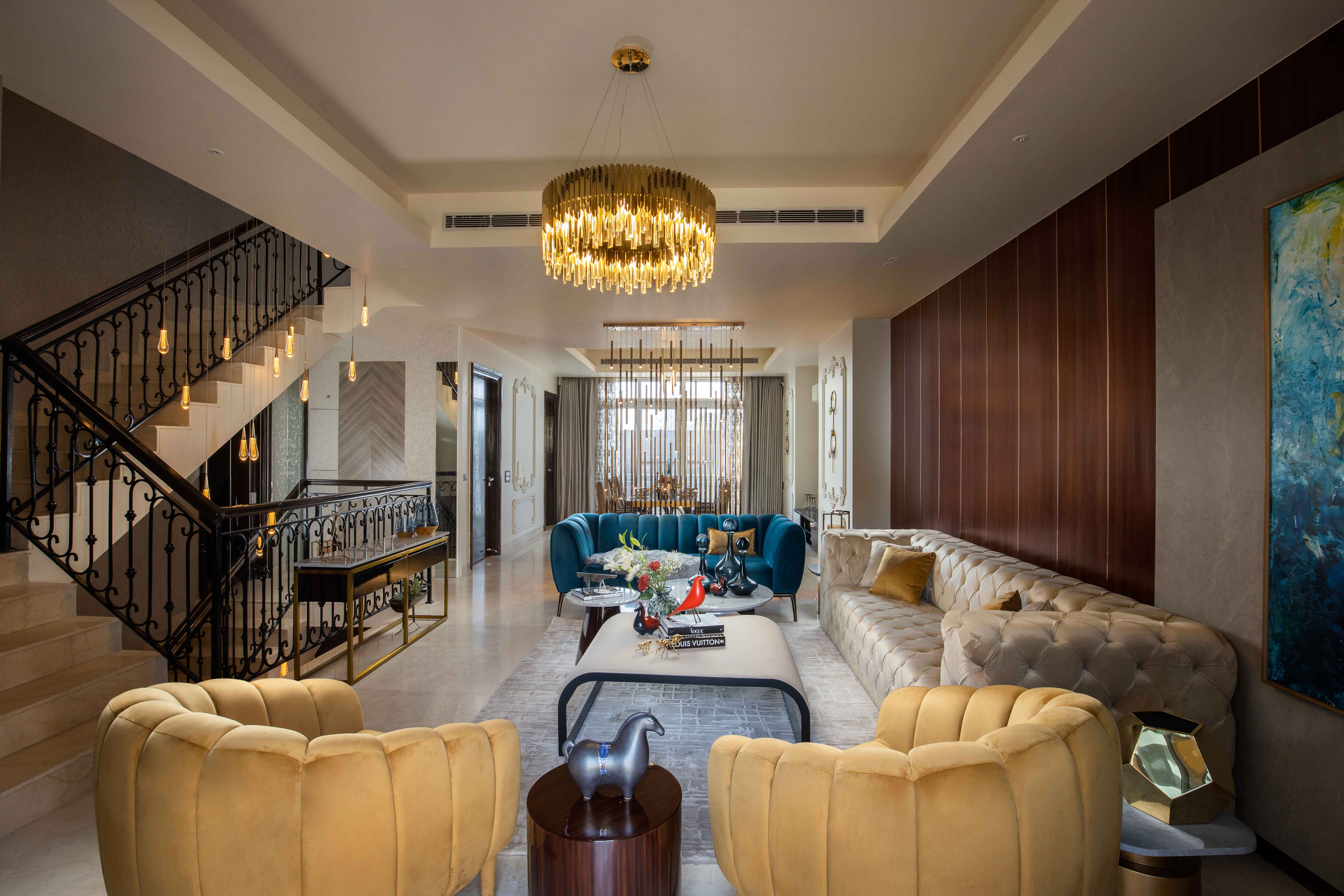