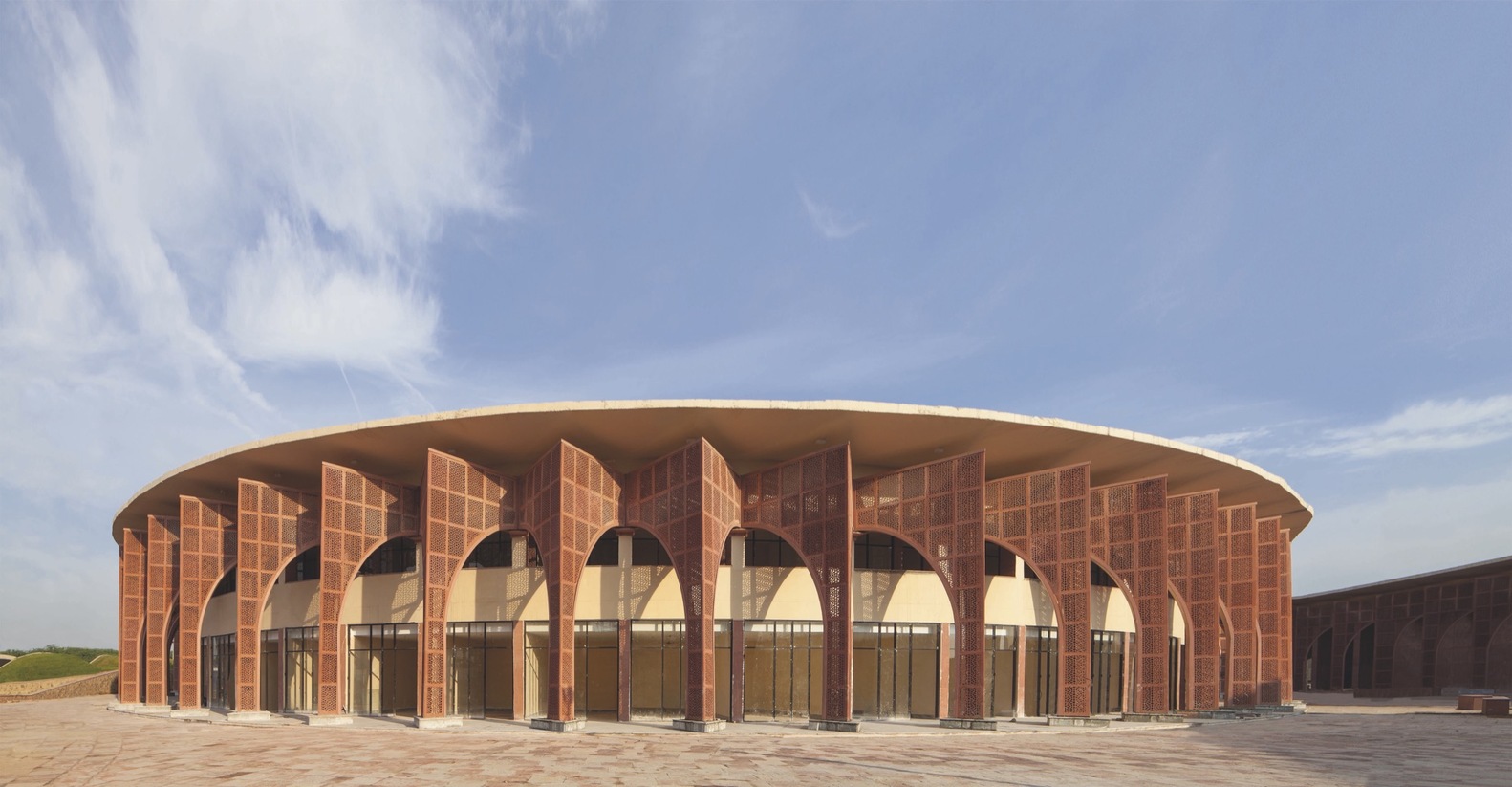 Awadh Shilpgram by Archohm stands for the artisans and craftsmen of India.

Lucknow, often known as the city of Nawabs, is home to sweet-mannered inhabitants and a royal background. The Nawabi city welcomes tourists all year round. Awadh Shilpgram, a sort of urban bazaar, by Archohm acts as a confluence of tourists and residents in the city. Rooted in tradition and inspired by the people’s needs, the project is a massive, spiral building that does a whole lot to engage its users. A blend of the then and now, Awadh Shilpgram has been proudly standing in Lucknow since 2016.

Awadh Shilpgram – an introduction to the project

Arches dominate Awadh Shilpgram; the arches along with the jaalis distracts one from the sheer volume of the building. Arches and jaalis are the two elements that have been a part of Lucknavi architecture since the very beginning. In this case, tribute has been specifically paid to the Rumi Darwaza and Imambaras of Mughal architecture. ‘Awadh’ in Awadh Shilpgram refers to how Lucknow and the surrounding regions were addressed during that period. Grounded in history, the users are engulfed in a humble space as opposed to being overwhelmed by the scale. Interventions employed to achieve abundant light and natural cross-ventilation are part of the factors that render the space welcoming. The projects makes space for two hundred shops housing the local craftsmen and artisans.

In addition to shopping, users can engage in other activities in specifically designed spaces like craft courts for workshops, an amphitheatre for casual interactions, a food court that serves different cuisines from different parts of the country, an auditorium, and a dormitory hostel. All in all, the complex is an integrated building that functions as a campus.

Interventions employed to achieve abundant light and natural cross-ventilation are part of the factors that render the space welcoming.

The purpose of Awadh Shilpgram was also to create an interface between the residents of Lucknow and the local artisans. A space solely dedicated to this would probably not generate the same response from the residents as a multi-purpose complex like Awadh Shilpgram does. While the tourists are likely to visit and be intrigued by local craftsmanship, natives  might have overlooked it. Combining activities makes residents more susceptible to visit the complex and engage in shopping, due to visual connections. It’s safe to say, the residents have accepted the project with open arms. Awadh Shilpgram now hosts the annual Lucknow Mahotsav every year.

Another reason for the project’s success is its tactical location. Its proximity to Kannauj, Khurja, Bhadohi, Moradabad, Varanasi, Firozabad, and many more such cities-each with distinct handicrafts, makes it a relevant place to host a socio-cultural institution. The complex caters to the needs of the craftsmen heavily. It does not just provide but accommodates them. From a spiralling, smooth-cornered shopping area to cave-like cosy, green-roofed craft workshops – Awadh Shilpgram does all it can to help them earn their livelihood and propagate their work.

The steel structure of Awadh Shilpgram is clad in Red Agra sandstone. The bazaar-like narrow streets are achieved in the innermost spiral of the building. Arched jaalis, inspired in design by famous Lucknavi Chikankari embroidery, act as the inner skin of the building. Each arch allows entry into the corridor at the ground-floor level. This grounds the design in current times since jaalis took care of privacy back in the day. Today they serve as access points. The zigzag form of jaali arches is derived by modifying the basic lines of traditional Mughal arches. The double-height volume exudes an aura of grandeur and richness of space associated with Mughal architecture, like in the Buland Darwaza at Agra.

The most impressive feat that Awadh Shilpgram achieves is de-intimidating a singular building, spread over the huge 20-acre site. The thoughtfully designed complex does the difficult task of using design as a bridge between intent and practicality. Recently, the complex has been seized by DRDO, India to convert it into a makeshift 300-bed hospital to help combat the ongoing pandemic. It’s as if to say, the spacious Awadh Shilpgram is always there for its citizens.

From a spiralling, smooth-cornered shopping area to cave-like cozy, green-roofed craft workshops – Awadh Shilpgram does all it can to help them earn their livelihood and propagate their work.