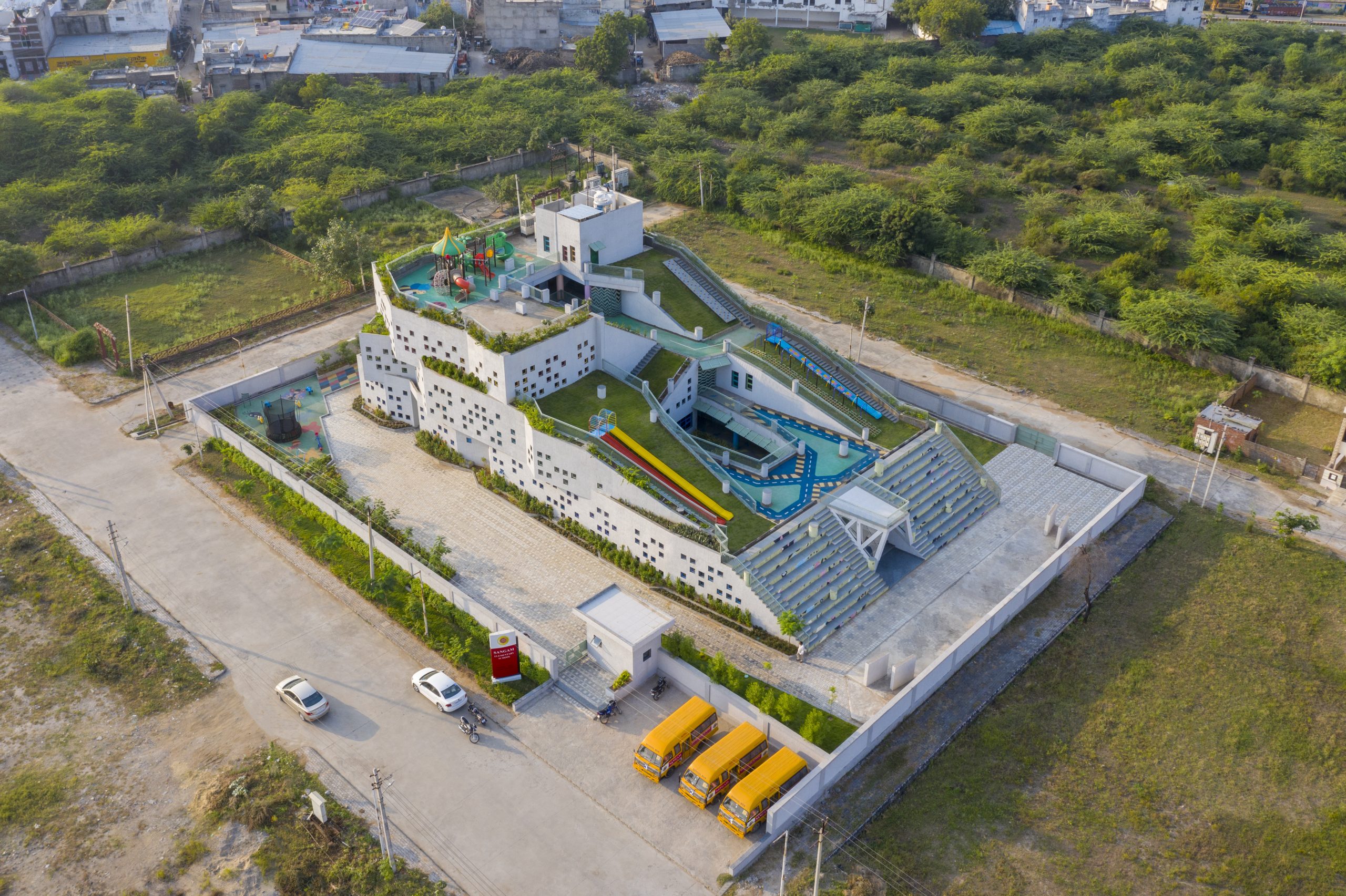 “In order to design an elementary school, the first and foremost principle is simple – It needs to be Fun,” says Naman Shah from Sfera Blu Architects. Sangam Elementary School incorporates fun child development frameworks for the young, excited, noisy and playful audience. The design focuses on establishing an entity for students, where the built space and environment together becomes a successful tool for learning.

Spread across 2612 square meters, Sangam Elementary School in Bhilwara, Rajasthan emulates multiple Indian mythological stories that illustrate the idea of “teaching under the trees in open surroundings.” The concept of conducting education in open spaces holds great significance in current times given the evident disconnect between city-dwellers  and their natural surroundings.

Outlining the same, Naman says, “An entire generation of urban dwellers have missed out on street games. The built forms need to incorporate this missing element. We were inspired by this concept as it helps children connect with nature. It is a wonderful way to learn various life skills, and presents an opportunity for kids to run, jump, slide, make a mess and explore themselves in informal ways.” Built for three- to seven-year-old kids, the idea was to create a space such that the thought of going to school would bring a smile on their faces!

Built for three- to seven-year-old kids, the idea was to create a space such that the thought of going to school would bring a smile on their faces!

The form of the building has multiple punctures inspired by a triangular cheese sliver with tiny holes on its sides as seen in cartoons. The exterior facade has numerous tiny window panels to maintain visual connectivity with nature and the surroundings. The size of the windows is small to ensure safety. The height of the students drives the positioning of these windows. The students get a view of the outside while sitting at their desks.

The building is a three-storeyed structure.  Staggering each floor creates small planters and generates an organic form of the structure. The building is higher towards the south side hence blocking direct sunlight. The highly perforated built form has two courtyards which permit filtered daylight to seep into the corridors. The courtyards provide porosity to the built-form as well as help reduce the heat gain and provide efficient air circulation in the entire building. With the air and diffused light that enter from the top, the inner portion of the building remains cool and well-lit.

The small external windows lower the heat gain. The roof has a natural garden on top which insulates the building from the top. The shape and volume of the classrooms are organic, unlike the usual rectangular classrooms. The double height spaces convert into multi-purpose mezzanine spaces for the kids to play, relax and unwind.

Gone are the times when buildings and landscape were separate entities. Naman explains how contemporary schools need to blend with nature. “The slopes gave rise to double height volumes, which gave rise to mezzanines inside the classrooms. These additional spaces provide room for multi-purpose activities which otherwise require additional rooms. All the activities which cannot be done indoors have found space either in the margin or on the rooftop.”

“The site area versus the brief gave little room for games and play area except the margin around the built form. This gave us the idea to use the roof,” explains Naman emphasizing the idea of the roof-top jungle. The first slope has two huge custom-made slides; the second slope, which is the longest slope in the building, has obstacle courses; and the third slope, which has enough sunlight, has planters, one kitchen garden for each class to grow their own vegetables and flowers. This creates a special bond between the children and the nature around them. The topmost part of the roof has a jungle gym where they climb and swing with a view of the entire city beyond.

The building follows Vastu-Shastra principles and thus pre-deciding the highest point and lowest point of the structure giving rise to multiple slopes.

Designs like Sangam take a quantum leap forward towards celebrating the student life. Naman points, “If the student loves the place of learning, then knowledge will find its way. The students of this school want to stay in school for as long as possible and so I feel this is something we have achieved.”