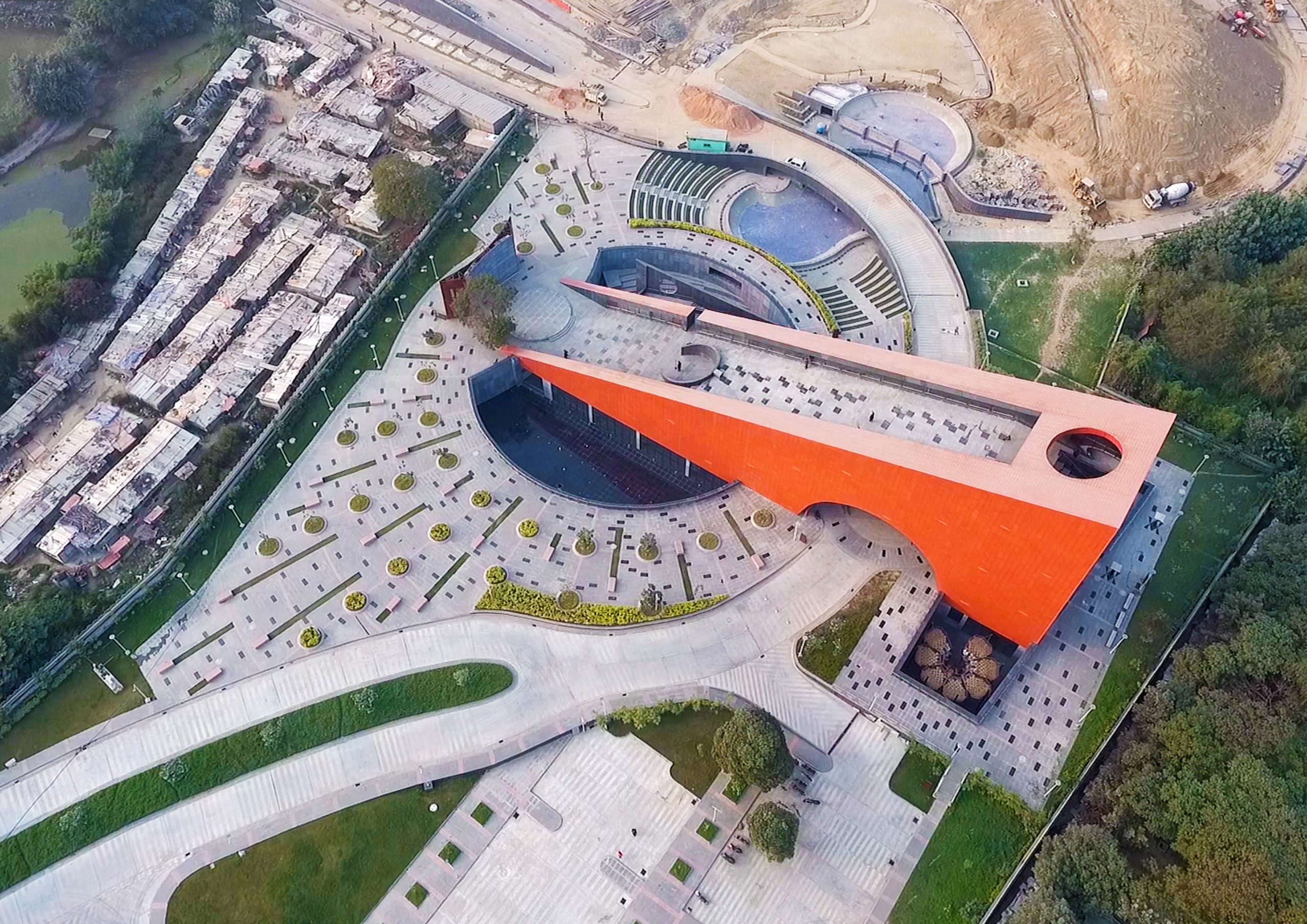 The Museum of Socialism acts as a gateway to a bigger project called Jayaprakash Narayan International Centre. It is an extension of the Ram Lohia Mandir Park. Completed in 2016, the museum has been widely appreciated for its overall approach. With the upcoming Jayaprakash Narayan International Centre, there was a revision in the purpose of the museum.

The Museum of Socialism, completed in 2016, has been widely covered on media platforms. The haunting presence of Jayaprakash Narayan’s simplicity in the museum’s design is the prime reason for the attention it has received. Right from the warm yet austere terracotta to employing platonic volumes to induce clarity into the experience of the space, numerous elements capture the essence of his character. The play of levels and natural light weave together the inspiration and the purpose of the museum.

The terracotta skin of the building facilitates proper air-flow and ventilation through perforations in the tiles. The design team achieved thermal comfort and noise exemption by filling rock-wool between the dry-cladding and true wall. A visitor’s journey inside the museum will be a contrast to their impression of the outside. On one hand ramps, staircases, and steps allow them to experience variety in volume and space. While on the other the variation between dimly lit galleries and light-flooded common areas gives their experience a dramatic touch.

Archohm further reveals,” The wedge-shaped facade of the museum is of the same shape and size carved out from the mass of the ongoing International Centre building. It diagrammatically represents the triad of tenets of Jayaprakash’s socialism: freedom, equality, and brotherhood, celebrated and etched in multiple languages on the terracotta panels spelling the power of the unitary even as a part of the whole.” The void in the interpretation centre pushes the limits of the structural design and acts as a gateway.

The international centre has an institutional identity, reflecting the polarised views of civic authorities, curators, historians, and the general public. The building – the parts and the whole do their best to communicate the essence of the International Centre. This essence talks about the idea of socialism and about the visionary – Jayaprakash Narayan. The Museum of Socialism, on the other hand, symbolizes J P Narayan’s Spirit and leadership that brought people together. It changed the political demographic in the country in the mid-1970s.

Landscape as a Design Element

The landscape is an important binder between the two buildings. Numerous pause points and gathering spaces help merge the character of the buildings. Spaces like an amphitheatre and open-air theatre, further seal the democratic nature of the premise. Situated amongst an urban forest, the project with its green spaces and vistas of Ram Lohia Park acts a retreat from the hustle-bustle of city life.

The Jayaprakash Narayan Interpretation Centre is built on the idea of creating public architecture whose design vocabulary endows a contemporary value to past events. On the other hand, the Museum of Socialism is a symbolic anchor point of a plaza open to people – making it an important urban node. “The museum’s design and architecture take responsibility for enticing and engaging visitors while the interpretation centre’s scale is one that leaves them in awe. Both architectural gestures are cohesive yet individual in their respective ways”, states Archohm. The complex’s position on a site offers the citizens of Lucknow multiple choices of leisure, business, recreation, and sports in the International Convention Centre. Together they take their place on the land, defining an important node and generating the matrix around.