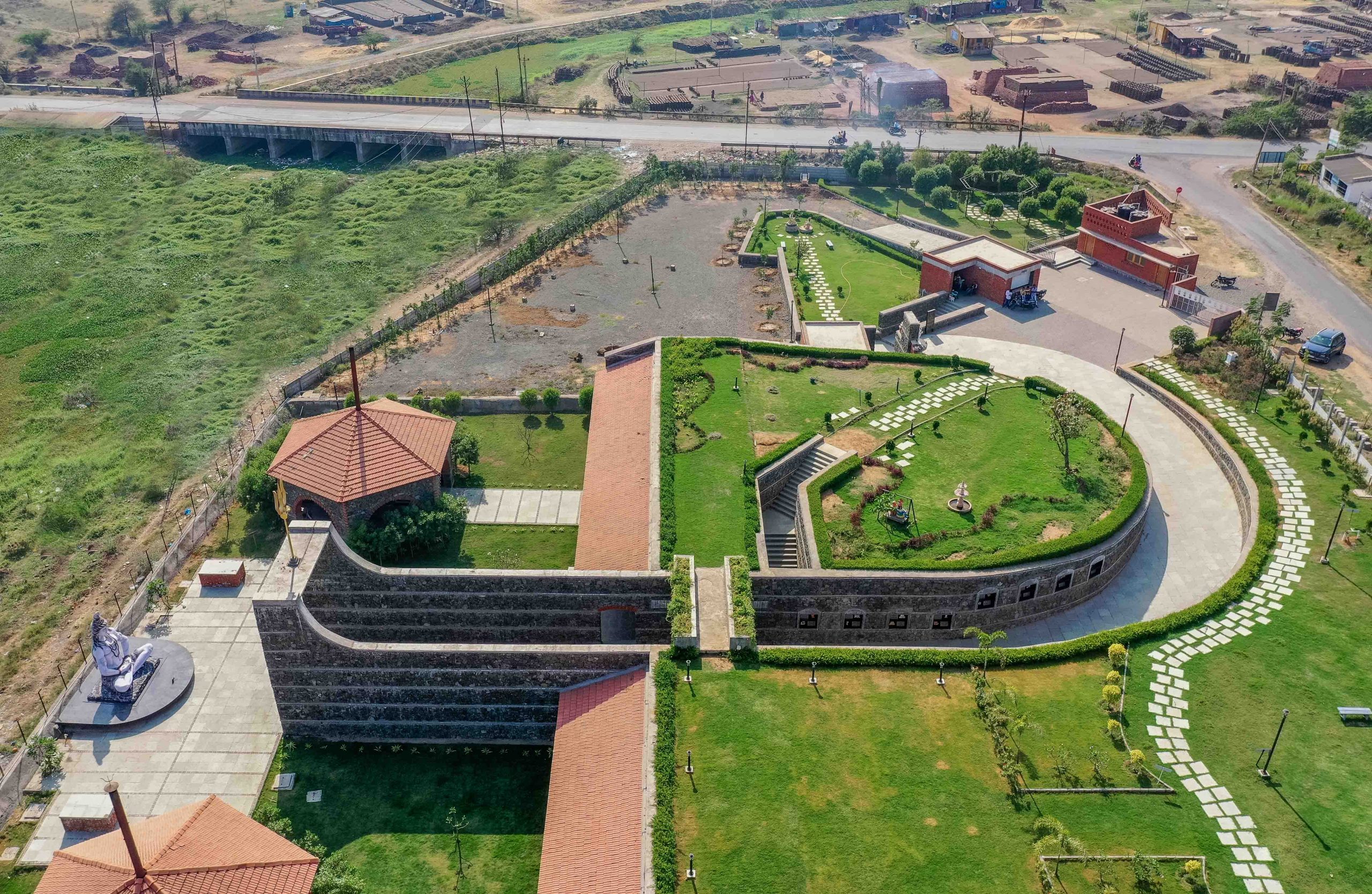 The Udan Crematorium exhibits solitary spaces between emotion and design. In Hindu mythology, death is seen as an entrance to another cycle of life. The soul is trusted to be immortal and the body or dehya it dwells in is deemed temporal in nature. Human mortality and death make many uncomfortable and active dialogues on matters of death are often avoided. This fear and discomfort with death has resulted in cremation spaces being designed as segregated, cold, and depressing spaces in the urban context. Udan Crematorium by d6th Design Studio, reintroduces healing and emotional recovery to the architecture of crematoriums. It is an exploration of how spaces can channel the feelings of awe and anxiety to console the bereaved.

Udan Crematorium, at Amalsad town in Gujarat, India, was commissioned by a private trust. The intent was to restore urban vitality in cremation spaces. Himanshu Patel, the principal architect conceptualised this space in a way which aids the cremation rituals. It also becomes a valuable public space for daily use in an urban setting.

The two-acre site slopes from the north to the south-west with a total drop of five metres. The design strategically split the contour of the site into two levels. The lower level houses the cremation functions, and the landscaped upper level opens up to the public. The design team employed the cut-fill method to achieve this level difference. Both these levels connect with a ceremonial ramp that deepens the transition between the spiritual park and the sunken crematorium.

Human mortality and death make many uncomfortable and active dialogues on matters of death are often avoided. This fear and discomfort with death has resulted in cremation spaces being designed as segregated, cold, and depressing spaces in the urban context.

The Spiritual Park located at the upper level doubles up as a significant public space for socio-cultural engagement. It also becomes a reconciling space for the mourners.  “In Indian context, society revolves around religion and such spaces often become more than just places of devotion. Less conventionally, these spaces cater to all ages and genders regardless of the part of the crematorium complex.” The spiritual park becomes a secular place to share emotions, space and the feeling of losing someone close.

The design situates Nandivan and Sitavan on the lower west while zoning the children’s play area and Vrindavan towards the upper east. A wavy pathway at the east end of the site leads to the iconic ‘Shivalinga’ idol and segregates the cremation courts from the adjoining residential units. The design layout takes mourners from the entrance plaza to the hidden crematorium through the Mukti Marg, which is a 5 metre wide, 60 metre long ramp. As one approaches the crematorium, the stone retaining walls create a shaft effect. The retaining walls hold murals of different iconic structures from the local town which reflect a reminiscence of the departed soul. The feelings of anger, grief, love, and anguish gradually heighten. The design team displayed small idols of Hindu saints and their maxims in wall niches form a pious aura that solaces the bereaved.

The retaining walls hold murals of different iconic structures from the local town which reflect a reminiscence of the departed soul.

Udan Crematorium – the Philosophy behind the Design

A bridge with hanging creepers connecting the two gardens at the upper level comes in the middle of the ramp. “According to Hinduism, Meditating Shiva in a crematorium speaks of aloofness from materialism and the constant understanding that one has to die and be reduced to ashes. It recognizes the world and encapsulates it in the philosophy of creation, sustenance and destruction- symbolized by Trishula.” To accentuate this, the design team visually framed Lord Shiva with elevated stone walls and the slab having a golden Trishul at the end of the ramp. The architects describe this passage as, “The entire movement through the ramp is by and large a gradual transition from external environment to internal intimacy, from outer noise to inner silence and from dance of creation to the dust of death.”

The sunken courts at the lower levels limit the relationship with the exterior environment. This thus evokes feelings of remembrance, departure and reflection. The design team symmetrically arranged two hexagonal cremation pyres and separated them by a ramp. This gives the possibility of two funerals at the same time with a sense of privacy. The administration office, prayer hall, and wood storage building are subterranean facilities accessible from wide corridors opening to the cremation courts. These semi-open spaces dualise as a spillover waiting area where relatives can assemble. Staircases from this waiting area directly take the mourners to the upper landscaped area. This ensures that weird encounters between the two families are avoided.

The sunken courts at the lower levels limit the relationship with the exterior environment evoking feelings of remembrance, departure and reflection.

Locally available random rubble stones coupled with terracotta roofing tiles instil a tranquil and muted environment, something very apt in spaces like these. Not only do these materials add texture and warmth to the spaces, but they are also cost effective and time tested.

The cremation space, the ceremonial path and the spiritual park at Udan respond to deep humane emotions that reflect on life, death, and cremation. This project is an attempt to disrupt the societal taboos relating to death rituals through an architectural intervention. Where generic cremation spaces are dreary neglected grounds, the thoughtful design of Udan Crematorium is a consolation for the bereaved that their loved ones are definitely “in a better place.”